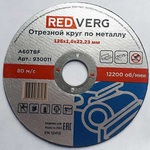 Test is fine cutting discs for metal for LBM (“IP”) – test circles brand Redverg of the company owned “TMK Tool”. Felt circles with a diameter of 125 mm and a thickness of 1.0 mm.

the Standard test program involves the cutting of the three types of black metal: area 32х32х4 mm, smooth rod with a diameter of 16 mm and a sheet width of 25 cm and a thickness of 1.2 mm. All tests are performed manually and on special stands – see our video that shows how to look like the stands and how they work.

the drive of rotation of the abrasive discs in all cases used the angle grinder Fein WSG15–125P, but feeding into the cutting area automatically. Thus we exclude such subjective factors as misalignment of the drive side or just uneven load. Cut the wear of the circle, until, while the flange nut is not stopping him to fully penetrate the workpiece. For each metal tested three copies of the circles, the article shows the average results for each test type.

The resource from disk Redverg far exceeded our expectations. Retail price at 35 rubles apiece – below the market average, normal for circles in China. Russian circles are usually cheaper, European – more expensive, sometimes significantly. We expected that the resource will be comparable to similar wheels made in China, however, “has Redberg” scored above many European and on the level of the best Russian models. Due to the low cost price of a single cut happened at one of the lowest, comparable to “Luga” community, a resource which is two to three times lower and the price of which is minimal.

We are to compare, here are the charts that show the results of the circles Redverg compared to four competing brands: Elitech, Luga Abrasiv Extra Attack Profi bison. However, this choice is not the only option, our database now contains results of tests 36 articles cutting disc for metal of similar size. Such diagrams anyone can build by selecting from this database any samples at its discretion, and comparing Redverg though with Bosch and Hilti, though with Klingspor and 3M.

On the label the drives “I Redberg” stated compliance with standard EN 12413. So we tested them not only on the mechanical strength, as required by Russian GOST R 52588–2011 “the abrasive Tool. Safety requirements”, but the resistance to lateral load – in accordance with the requirements of EN 12413. Both tests were successful.

In tests, "rupture" (this is a test for mechanical strength) of the test circle dispersed on a special stand to speed nearly twice the maximum permitted operating speed. A circle with a diameter of 125 mm is required to withstand rotation speeds of up to 21 200 rpm, test drive Redverg sustained acceleration to 22 900 Rev/min.

When testing on the load side, the drive accelerates to the maximum operating speed, then from the side press with a special roller. The force with which the roller presses on the side surface of the disk increases rapidly, sooner or later the circle will inevitably burst. In accordance with the requirements of the European safety standard EN 12413, it must withstand side loads up to 40 N. Sample Redverg withstood 41 N.

Cutting discs for angle GRINDERS brand Redverg during the tests showed a very good resource at an affordable price. For the unit cost of cutting compete with the circles Luga Abrasiv Luga abrasive plant, which are still confidently held the lead on this parameter due to the extremely low prices. This is a very slightly!

It is also important to note that the samples Redverg showed full compliance with the requirements of the Russian safety standard for abrasive tool GOST R 52588-2011, but more stringent European EN 12413.

Only thing you can blame the manufacturer of the circles Redverg – the discrepancy between the declared and actual height (thickness) circles. Real average height is 1.32 mm, the claimed – 1.0 mm. Standards be exceeded not more than 0.2 mm, thus, if the label was a figure of 1.2 mm, then the fault would not be happening. Formally to compare Redverg need circles with the stated thickness of 1.2 mm, but the trick is that such inconsistency is widespread and occurs among the majority of the on the market brands and trademarks. Very few samples that would really meet the requirement, the deviation is not more than 0.2 mm. for Example, "Luga” the circles correspond to such requirement, and formally, the comparison could be considered not quite correct – due to the greater thickness of the stock of abrasive circles at Redverg a little more, respectively, and the resource above. But if you look at things realistically, at the total picture it will not have a noticeable effect. At two-threefold difference in the number of cuts performed to discuss the additional advantage at the level of ten percent is not relevant.

ALLLAST ARTICLESPOPULAR12 Articles 5 Articles on the application of ...1 Articles about the technologies of production 1 Rubric1 Market research